Part II, “Framing the Past”/ Rembrandt, Queen Victoria, and the French Empire

“It was always my intention that The Frieze should be housed in a room which would provide a suitable architectural frame for it.” Edvard Munch

Continuing my historical research into the development of frame design and the framing industry, with my inspiration from the Frame Collection at the MFA, I find that Napoleon changed the path of the frame artisan. The modern concept of the “frame shop” comes to us in the 17th and 18th Century. Also the admiration for the “black Frame” is due to the Dutch influence and Trade Market. The 17th and 18th centuries shift the frame from elite to something for the average home,opening the “Ready Made” market and affordable materials for mass production. The Boston School of Frame makers take from the past and push these concepts in the 19th century. This is another interesting piece to the history of Picture Framing.

The 17th and 18th Century saw the epicenter of great art move North-East to the more restrained Protestant areas of the Netherlands and Belgium. With the growth of the portrait as an essential symbol of wealth, taste and social standing, saw the re-emergence of the elaborate gilded frame and the use of dark ebony. The Netherlands had developed two distinct styles of framing. The first reflected the conservative inclination of the Protestant majority. Less Baroque ornamentation and limiting the use of gilding, replacing it with ebony wood veneers, silver and tortoiseshell. These were materials more valuable then gold to the Dutch.

The black frame became a symbol of sophistication and wealth. The “ripple frame” used by the artist Rembrandt, has a combination of flat surfaces and “ripple”design used to reflect light off dark ebony and capture the viewers attention. 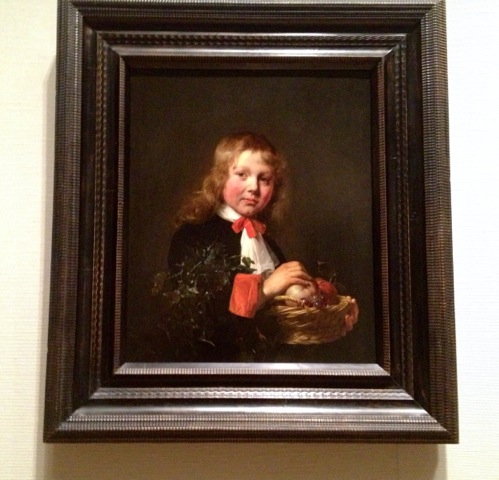 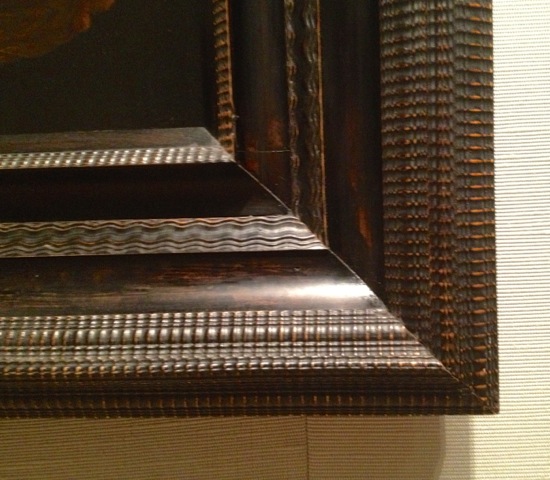 The second Dutch style is well known as the “Trophy Frame” or “Auricular”. Auricular frame design is based on the works of silversmiths Paul van Viand and his brother Adam (1569-1627). Carved often with flowers and fruits that are used to reference the paintings subject matter, for example theses frames were loved by the artist Vermeer. Many design principles used by the Dutch lead to the design aesthetics embarrassed by the Boston School of Framers. 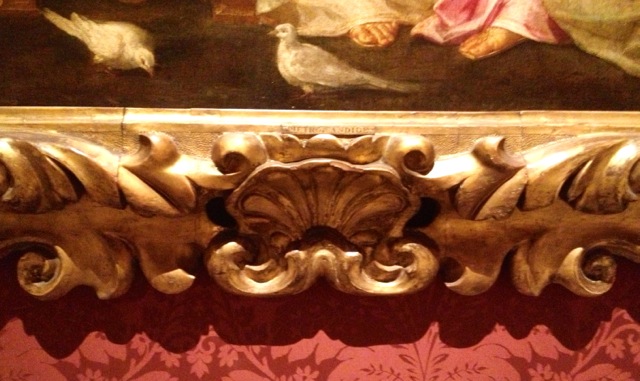 In the Late Georgian Period of England (1714-1830), the use of pictures as domestic decoration filtered down to the bourgeoisie. Prints, both as pure art and as political commentary and satire, were in great demand. Print publishing and selling, grew up as a whole new industry in London. Of course this new art medium needed framing in order to be properly displayed and enjoyed. Picture frame making became an offshoot of cabinet making, and simple, affordable wooden frames were developed to satisfy the new demand. To this day, the ‘Hogarth’ frame named after artist William Hogarth, (very dark wood with a simple gold line or two) is a staple of picture framers looking for a simple, traditional solution. The rustic simplicity of the “Hogarth” frame can be compared to the gilded “Carlo Maratta” Frame. Simple in design the gilded “Maratta” was economical to construct and could be purchased in ready-made sizes. Simple ornamentation such as ribbon, leaf and stick, and pearls were added. No complicated corner ornaments were used. Both frames were designed for the use of mass production. This changed the use of the picture frame from an elite luxury to everyman’s household item. The extension of wealth driven by the industrial revolution in Victorian England (1837-1901), meant more and more walls needing more and more decoration. Materials such as oak, bronze and brass were more economical. Painted finishes were now an affordable option to gilding and opened the frame market to independent craftsman and mass-produced frames. We see this mass-market development with the French Empire frame-makers under the rule of Napoleon.

The end of the French Revolution, brought the blended design style known as “French Empire” at the beginning of the 19th century. The Classical designs of Antiquity (for example designs from Pompeii and Egypt) were reflected in frames from this period. (See Blog: ‘Highlights from the Collection Part I)

Techniques developed by the Scottish-born architect Robert Adam in 1790, reintroduced composition ornamentation, which had been developed by the Italians two centuries before. Adam initially used this technique for interior architectural elements, but it soon spread into picture framing. Reverse moulds were carved in boxwood for use in casting composition ornaments. Casting of detailed “compo” ornaments, like bands or ribbons of Classical motifs (acanthus leaves), were applied to frames. Similar styles and production methods spread throughout Europe because the fine detailing needed to produce many of the decorations would have been extremely costly to hand carve. 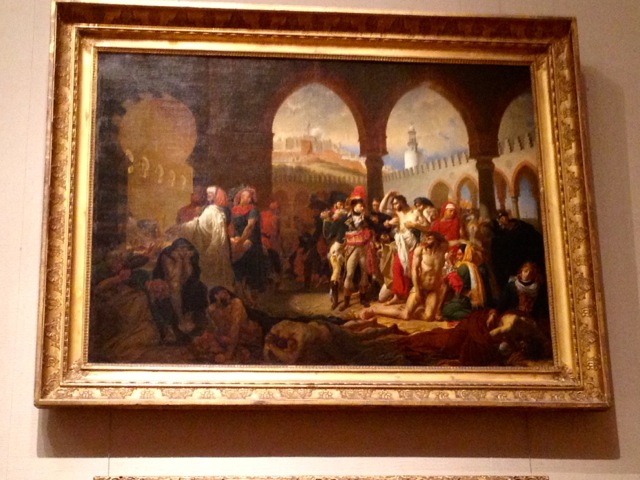 Napoleon
(Original Empire Frame)
Only Work on Display at the Museum of Fine Arts, containing his Image.

“Compo” is basically a combination of water, rosin, linseed oil, hide glue and whiting. The end result is similar to pastry dough. The “compo” is rolled out, allowed to cook and cut into shapes. The end product is beautiful and delicate. The fragile nature of these designs, due to the drying and cracking of the linseed oil, means that very few frames have survived completely intact from the 19th century.

Due to the lack of funds and the desire to distance himself from the monarchies of France’s past, Napoleon effectively brought the luxury market to an end. He abolished the gild system in 1791, and encouraged the mass production of frames by limiting the hand-carved frame market. Napoleon directed frame-makers to apply composition decorations to frames instead of hand-carving the ornamentation. With the dissemination of pattern books and mass-production methods, the Empire frame quickly spread across Europe.

Since Napoleon had to keep costs down and because of the great demand for Empire frames, mass production was the best solution. While a much smaller number of carvers were needed, gilders were still in demand. Napoleon had most of the frames in the Louvre replaced with Empire frames even though this stye clashed with many of the paintings. Catherine the Great of Russia would do as Napoleon did at the Hermitage during her rule.

The carving of luxurious frames flourished under Louis XIV, XV and XVI, but under Napoleon, carvers and and frame-makers suffered greatly. The status of frame-makers and wood carvers fell, along with that of other skilled craftsmen. The status of artists, however, had risen from one of mere artisan of the Renaissance, to one of creative force. Artists were even becoming rich and famous by the end of the Napoleonic-Era, but skilled craftsmen had no real place in a world of mass-produced frames.